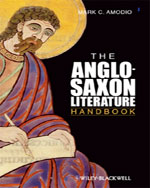 With its careful balance of scholarly precision and accessibility, The Anglo-Saxon Literature Handbook presents an accessible introcution to the literary works produced in England during the 600-year period from the end of the Roman rule until the Norman Conquest in 1066.  Author Mark Amodio breaks down the linguistic, aesthetic, and cultural barriers to understanding Anglo-Saxon literature, and brings this literary period alive for modern readers, allowing them to gain a rich appreciation of the vitality and relevance of the surviving verse and prose. The book opens with accessible overviews of the language, politics, religion, and key literary figures of the Anglo-Saxon world, and then moves on to a series of original readings of such seminal works as Beowulf, The Battle of Maldon, The Wanderer, The Seafarer and The Anglo-Saxon Chronicle, situating them within current critical debates on the role of women, notions of authorship and textual integrity, the role of the scribes, the oral tradition, and more. This is perfect introductory reading for students new to the field, whilst the close readings of key works allow those already familiar with the literature of the period to delve a little deeper.