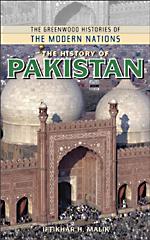 The History of Pakistan, 1st Edition

Explores the rich and intricate past of a highly diverse nation. Also examines the key issues and attitudes guiding Pakistan today: their volatile feud with India, internal debates over the role of Islam in Pakistani society, and the unbreakable dominance of the military in political affairs.

Front Cover.
Half Title Page.
Advisory Board.
Title Page.
Copyright Page.
Other Frontmatter.
Contents.
Series Foreword.
Preface.
Acronyms.
Timeline of Historical Events.
1: The Indus Heartland and Karakoram Country.
2: The Indus Valley Civilization: Dravidians to Aryans.
3: Islam in South Asia: The Indus and Delhi Sultanates.
4: The Great Mughals and the Golden Era in Indo-Islamic Civilization, 1526–1707.
5: The British Rule and the Independence Movements.
6: Muslims in South Asia and the Making of Pakistan.
7: Pakistan: Establishing the State, 1947–1958.
8: Military Takeover and the Separation of East Pakistan, 1958–1971.
9: Zulfikar Ali Bhutto, Pakistan People’s Party, and the Military Regime of General Zia-ul-Haq, 1972–1988.
10: Democratic Decade, 1988–1999: Benazir Bhutto and Nawaz Sharif.
11: General Pervez Musharraf and Pakistan in the Twenty-First Century.
Notable People in the History of Pakistan.
Glossary.
Bibliography.
Index.
About the Author.
Other Backmatter.