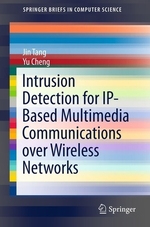 IP-based multimedia communications have become increasingly popular in recent years. With the increasing coverage of the IEEE 802:11™ based wireless networks, IP-based multimedia communications over wireless networks are also drawing extensive attention in both academia and industry. Due to the openness and distributed nature of the protocols involved, such as the session initiation protocol (SIP) and the IEEE 802:11™ standard, it becomes easy for malicious users in the network to achieve their own gain or disrupt the service by deviating from the normal protocol behaviors. This SpringerBrief presents real-time intrusion detection techniques that can quickly track the malicious behaviors which manipulate the vulnerabilities from either the 802.11™ or the SIP protocols. More specifically, this book presents interdisciplinary techniques to achieve an effective real-time intrusion detection system, which interweaves medium access control (MAC) protocol analysis, cumulative sum (CUSUM) based detector design, a novel Markovian model for CUSUM detectors, sketch-based traffic modeling, and wavelet based signal processing techniques.