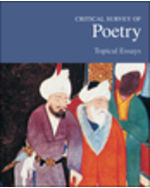 This Critical Survey was originally published in 1983 and 1984 in separate English and foreign language series, a supplement in 1987, a revised English language series in 1993, and a combined revised series in 2003. The Fourth Edition includes all poets from the previous edition and adds 146 new ones, covering 845 poets in total. Altogether, the writers covered in this set represent more than 40 countries and the history of poetry from antiquity to the 21st century. The set also offers 72 informative overviews; 20 of these essays were added for this edition, including all the literary movement essays. In addition, seven resources are provided, two of them new. Author portraits are included as available.