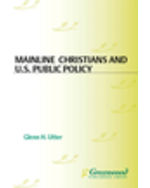 Mainstream Christianity has traditionally exercised significant political influence. With the devout Evangelical support of the Bush White House, the "Christian Right" has influenced everything from foreign policy to gay marriage. But the impact of organized Christianity on American political life is far from a new phenomenon -- and not all Christians are "right."

Mainline Christian Values and U.S. Public Policy: A Reference Handbook provides a revealing and unbiased look at the emergence of Christian denominations as a political force, primarily from the late 19th century to the present.

The book examines the origins, development, current organization and activities, and future prospects of nine mainline U.S. denominations: the American Baptist Churches in the U.S.A., the Catholic Church, the Christian Church, the Episcopal Church, the Evangelical Lutheran Church in America, the Presbyterian Church, the Reformed Church in America, the United Church of Christ, and the United Methodist Church. Readers will encounter a surprising variety of Christian voices offering a range of positions on the Iraq War, abortion, same-sex marriage, global warming, stem-cell research, the death penalty, and other controversial issues.