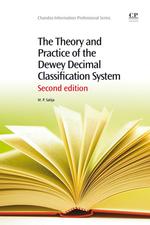 The Theory and Practice of the Dewey Decimal Classification System, 2nd Edition

The Dewey Decimal Classification system (DDC) is the world's most popular library classification system. The 23rd edition of the DDC was published in 2011. This second edition of The Theory and Practice of the Dewey Decimal Classification System examines the history, management and technical aspects of the DDC up to its latest edition. The book places emphasis on explaining the structure and number building techniques in the DDC and reviews all aspects of subject analysis and number building by the most recent version of the DDC. A history of, and introduction to, the DDC is followed by subject analysis and locating class numbers, chapters covering use of the tables and subdivisions therein, multiple synthesis, and using the relative index. In the appendix, a number of academically-interesting questions are identified and answered.

Front Cover.
Half Title Page.
Other Frontmatter.
Title Page.
Copyright Page.
Dedication.
Contents.
Preface.
Acknowledgements.
List of Abbreviations.
List of Figures and Tables.
About the Author.
1: A Brief History of the Dewey Decimal Classification.
2: Governance and Revision of the DDC.
3: Introduction to the Text in Four Volumes.
4: Basic Plan and Structure.
5: Subject Analysis and Locating Class Numbers.
6: Tables and Rules for Precedence of Classes.
7: Number-Building.
8: Use of Table 1: Standard Subdivisions.
9: Use of Table 2: Geographical Areas, Historical Periods and Persons.
10: Use of Table 3: Subdivisions for the Arts, Individual Literatures and for Literary Forms.
11: Use Of Table 4 And Table 6: Subdivisions Of Individual Languages And Their Language Families.
12: Use of Table 5: Ethnic and National Groups.
13: Multiple Synthesis.
14: Using the Relative Index.
A Broad Chronology of the DDC.
Table of DDC Editors.
Revision Tutorial: Questions.
Revision Tutorial: Answers.
Glossary.
Bibliography.
Useful DDC Websites.
Index.