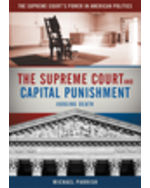 Supreme Court and Capital Punishment, the second installment in CQ Press's “The Supreme Court's Power in American Government” series, explores how Supreme Court rulings over its history have shaped and reshaped the rules under which Americans have been tried, convicted, sentenced and put to death for capital offenses. Through judicial decisions and other primary documents, this reference explores the impact of these rulings upon the behavior of legislators, judges, prosecutors, defense attorneys and defendants. Considerable emphasis is placed upon the twentieth century, especially the period since the 1972 Furman v. Georgia case. Since Furman, few areas of constitutional doctrine have undergone more abrupt changes than Court-mandated standards for administering capital punishment.