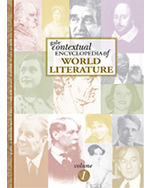 This four-volume set covers world authors from many periods and genres, building a broad understanding of the various contexts -- from the biographical to the literary to the historical -- in which literature can be viewed. The Gale Contextual Encyclopedia of World Literature allows a reader to analyze an author's work as a reflection of the heritage, traditions and experiences of the author's personal life and the beliefs, events, and lifestyles of the world at the time, given such context as:

The nearly 500 entries also identify the significant literary devices and global themes that define a writer's style and place the author in a larger literary tradition as chronicled and evaluated by critics over time. For example:

Critical thinking and activity prompts, in addition to images, further enhance the reader's own personal response to global literature.

"Designed for use by students, this broadly based encyclopedia--compiled by the editors of numerous other reference works for Gale in the fields of literature and history--provides a sweeping examination of the biographies of over 500 of the world's literary authors from earliest times to the present. Recommended. Lower-level undergraduates and general readers."--Choice, April 2010

"Through the use of this publication, the scholar will not only learn important facts about the author and the author's works, but will also have a better broad understanding of literary trends, stylistic traits, and the impact of historical events on different pieces...provides a unique perspective and useful information." --ARBA, July 2009