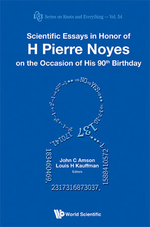 Scientific Essays In Honor Of H Pierre Noyes On The Occasion Of His 90th Birthday, 1st Edition

This book is a Festschrift for the 90th birthday of the physicist Pierre Noyes. The book is a representative selection of papers on the topics that have been central to the meetings over the last three decades of ANPA, the Alternative Natural Philosophy Association. ANPA was founded by Pierre Noyes and his colleagues the philosopher-linguist-physicist Frederick Parker-Rhodes, the physicist Ted Bastin, and the mathematicians Clive Kilmister, John Amson.Many of the topics in the book center on the combinatorial hierarchy discovered by the originators of ANPA. Other topics explore geometrical, cosmological and biological aspects of those ideas, and foundational aspects related to discrete physics and emergent quantum mechanics.The book will be useful to readers interested in fundamental physics, and particularly to readers looking for new and important viewpoints in Science that contain the seeds of futurity.

Front Cover.
Half Title Page.
Title Page.
Copyright Page.
Preface.
About Pierre.
List of Contributors.
Contents.
1: Unital Homogeneous Polynomial Operators on Hilbert Space with Applications to Nonlinear Theoretical Physics.
2: Towards a Generalised Combinatorial Hierarchy.
3: Quantum Cosmology and Special Mersenne Primes.
4: Bientropy – The Measurement and Algebras of Order and Disorder in Finite Binary Strings.
5: Constraints Theory Brief.
6: An Elegance First Approach to Looking for the Universe in Finite Geometry the Combinatorial Hierarchy Revisited.
7: Boolean Geometry and Non-Boolean Change.
8: Speculation on Consciousness as Relative Existence.
9: A Management View of ANPA (East) 1979 To 2012.
10: Critical Stability of Few-Body Systems.
11: Non-Commutative Worlds and Classical Constraints.
12: Report on ANPA to the ANPA Advisory Board 2008.
13: Reflections on Fundamentals and Foundations of Physics.
14: Ordering Operators: Towards a Discrete, Strictly Finite and Quantized Interpretation of the Tensor Calculus.
15: Information, Entropy, and the Combinatorial Hierarchy: Calculations.
16: Spacetime, Dirac and Bit-Strings.
17: Via Aristotle, Leibniz, Berkeley & Mach to Necessarily Fractal Large-Scale Structure in the Universe.
18: A Dual Space as the Basis of Quantum Mechanics and Other Aspects of Physics.
19: Discrete Motion and the Emergence of Space and Time.
20: Expanding–Contracting Universes.
21: Development of a New Approach to Systems Biology and Therapy Design.
Epilogue.
“A New Synthesis of Fundamental Processes”.
Series on Knots and Everything.