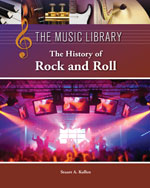 The History of Rock and Roll, 1st Edition

Rock and roll: Those three words are understood by people in almost every nation on Earth. They describe a type of music—and an attitude—that made history and continues to change the musical landscape. The music style started out in the United States as a new type of dance music for teenage baby boomers during the mid-1950s. By the 1960s, the music transformed the cultural—and political—landscape of much of the world. Never before in history has a style of music come along that so quickly and so completely changed the world. From the very beginning, rock and roll and the musicians who performed it challenged existing social norms, provoking defiance, disrespect for authority, and, at times, revolution among fans. In the modern world, rock-and-roll music continues to define what it means to be a young person. Rock stars and their songs affect the way people look, dress, act, and talk. In this new addition to the Music Library, author Stuart Kallen traces the history of rock and roll from its early 1950s beginnings through its most significant developments to date.