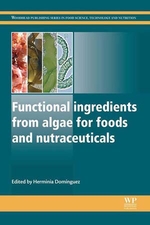 Functional Ingredients from Algae for Foods and Nutraceuticals, 1st Edition

Algae have a long history of use as foods and food ingredients. There is increasing interest in them as sources of bioactive compounds in functional foods and nutraceuticals. Functional Ingredients from Algae for Foods and Nutraceuticals reviews key topics, encompassing macroalgae (seaweeds) and microalgae. After introducing algae as a source of biologically active ingredients in functional foods and nutraceuticals, Part one explores the structure and occurrence of the major algal components. Part two highlights biological properties of algae and algal components and includes chapters on the antioxidant properties of algal components, anticancer agents derived from marine algae, anti-obesity and anti-diabetic activities of algae, and algae and cardiovascular health. Chapters in Part Three focus on extracting compounds and fractions from algae and cover conventional and alternative technologies for producing algal polysaccharides. Finally, chapters in Part Four explore applications of algae and algal components in foods, functional foods, and nutraceuticals including the design of healthier foods and beverages, prebiotic properties of algae and algae-supplemented products, algal hydrocolloids for the production and delivery of probiotic bacteria, and cosmeceuticals. Functional Ingredients from Algae for Foods and Nutraceuticals is a comprehensive resource for chemists, chemical engineers and medical researchers and those in the algaculture, food, and nutraceutical industries.