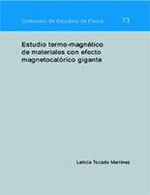 The book collects the author's doctoral thesis in which they have studied giant magnetocaloric effect materials, both normal and reverse. The experimental results were compared with the theoretical model of Bean and Rodbell and Pytlik model and Zieba. It has also made a thermodynamic study of magnetocaloric parameters calculated from measurements of magnetization with the ratio of Maxwell and Clausius-Clapeyron equation, which has shown that it is valid for phase transitions of first order. Explained the source of error in the first case and has proposed a method in the second. For the thermal characterization of such materials has been modified adiabatic calorimetry facility, which allows direct measurement of the magnetocaloric effect parameters by varying quasi-statically up to an external magnetic field 6 T between 4.2 and 350 K.