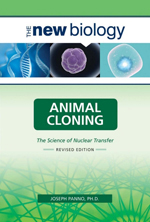 Nature has been cloning animals, cells, and molecules for millions of years. Scientists got into the act just 34 years ago when John Gurdon, a professor at Cambridge University in England, cloned a frog. Gurdon's experiment did not generate a great deal of interest at the time and was rarely discussed outside the world of research labs. In 1996 when Ian Wilmut, a British biologist, cloned a sheep named Dolly, the reaction was dramatically different. The news of Dolly's birth was reported in every major newspaper and magazine around the world, and she quickly became the most celebrated lamb in the history of animal husbandry. ANIMAL CLONING, Revised Edition discusses all aspects of this new biology, including the scientific, ethical, and legal issues. Completely revised and updated, this edition now features full-color photographs and illustrations as well as further resources and Web sites to guide additional research. Beginning chapters discuss cloning within the context of a natural process that many animals use as a survival strategy, followed by the historical development of the nuclear transfer procedure, the cloning of Dolly the sheep, the medical applications of cloning technology, and much more.