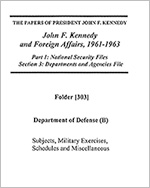 Devoting his entire inaugural address to international affairs, President John F. Kennedy spoke of the need for all Americans to be active citizens, famously urging the nation to, "Ask not what your country can do for you; ask what you can do for your country." He also asked the nations of the world to join together to fight what he called the "common enemies of man: tyranny, poverty, disease, and war itself." In closing, he expanded on his desire for greater internationalism: "Finally, whether you are citizens of America or citizens of the world, ask of us the same high standards of strength and sacrifice which we ask of you."

President Kennedy took office in a time of rising international tension. The struggle of hundreds of new nations to break from their colonial past and establish modern institutions set loose chaos across much of the globe. The rhetoric and actions of the erratic Soviet premier Nikita Khrushchev suggested a new Communist boldness, even recklessness, and a determination to exploit the prevailing instability. The development of new weapons systems added an especially frightful dimension. The fate of the world thus seemed to hang in the balance, and Kennedy assumed power certain that the survival of the United States depended upon its ability to defend "free" institutions.