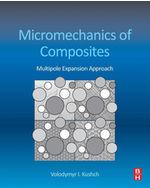 Micromechanics of Composites: Multipole Expansion Approach is the first book to introduce micromechanics researchers to a more efficient and accurate alternative to computational micromechanics, which requires heavy computational effort and the need to extract meaningful data from a multitude of numbers produced by finite element software code. In this book Dr. Kushch demonstrates the development of the multipole expansion method, including recent new results in the theory of special functions and rigorous convergence proof of the obtained series solutions. The complete analytical solutions and accurate numerical data contained in the book have been obtained in a unified manner for a number of the multiple inclusion models of finite, semi- and infinite heterogeneous solids. Contemporary topics of micromechanics covered in the book include composites with imperfect and partially debonded interface, nanocomposites, cracked solids, statistics of the local fields, and brittle strength of disordered composites.