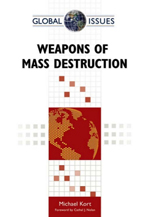 WEAPONS OF MASS DESTRUCTION provides an objective analysis of a subject easily distorted by fear. It begins with a history of the ancient and medieval use in warfare of biological weapons and goes on to explain how governments and terrorist factions have refined this practice to include biological, chemical, and nuclear weapons as a means of coercion or as a deterrent. The book examines past and current U.S. policies regarding WMD---including the decision to drop atomic bombs on Japan during World War II---and how an arms race ultimately led to a cold war with the Soviet Union. The volume then offers an international perspective through discussion of how other major players---Russia, Israel, India, Pakistan, and North Korea---Have each chosen to approach the issue of WMD.