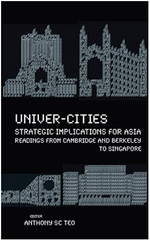 Univer-cities: Strategic Implications for Asia aims to redefine the multi-faceted symbiotic relationship between universities and host cities. The four readings in this reader will invite readers to challenge the traditional view of what a university is as a place, and re-define the university as a space; drawing discoverers, creators, and seekers who are keen to preserve and enhance the value of higher education in Asia. This reader will also show how universities can make a huge and innovative impact on the immediate, surrounding, and global communities that are drawn into its ambit of its campus and sought out by the university in inter-univer-city and trans-displinary linkages.Written by worldly academic leaders and professionals from Berkeley, Cambridge, Canberra and Singapore - who are prominent in fields of higher education strategy, campus cum urban planning, design, and architecture - the readings will shed some light on the future and power of univer-cities. It also shares seven strategic implications the concept has on Asian universities - this is especially timely and apt for a part of the world where education, togetherness, hard work, high-savings rates, and economic growth are emerging tectonic changes that the trinity of China, India and the Southeast Asian region engenders. It is no wonder that several top Asian cities have universities that have been ranked among the Top 50 universities in the world.