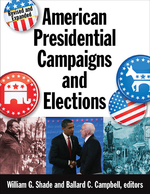 This award-wining reference work has been revised, updated, and expanded to provide in-depth coverage of every presidential election campaign in American history, from 1788–1789 through 2008. The section on each election includes a vivid narrative that captures the drama, excitement, and political maneuvering of the campaign, with profiles of the major candidates, maps and tables of the voting results, a chronology of key events, a selection of primary-source documents (speeches, party platforms, letters, songs, and the like), and recommended readings. A series of eight overview essays by notable historians provide general context and thematic insight. Special additions and enhancements for the online version include entirely new sections on the 2004 and 2008 elections; an updated Master Bibliography for important works on presidential election history; updated Further Reading lists; revisions and updates to thematic essays and main election entries; and the addition of Web links to all sections from 1952 to 2008, including direct-click access to video files and other multimedia resources.