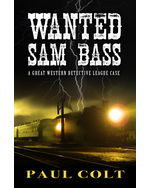 The Pinkerton Detective Agency had a competitor. Who knew? Wanted: Sam Bass introduces the Great Western Detective League and a colorful cast of law enforcement professionals operating across the west in the late eighteen hundreds. Sam Bass launches his outlaw career in 1877 with high stakes stage and train robberies. Wells Fargo and Union Pacific want Bass and his gang. Crafty bounty hunter Briscoe Cane takes the case for the league. Pinkerton assigns agent Beau Longstreet. While Cane dogs the gang’s trail‚ Longstreet entertains ladies with information on Bass. With a hefty stack of reward money at stake‚ Cane and Longstreet match wits to bring down Bass in a winner-take-all race to a bloody showdown in a dusty Texas town.