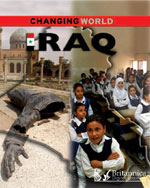 In Iraq, you will learn that Iraq, once called Mesopotamia, is known as the "cradle of civilization," the location of the world’s first cities and empires. From 1979 Iraq was ruled by the brutal dictator Saddam Hussein. In 2003 Hussein’s regime was overthrown following an invasion by an American-led coalition. In the chaotic aftermath, the occupying forces struggled to contain a powerful insurgency, despite the establishment of a democratically elected Iraqi government in 2005.