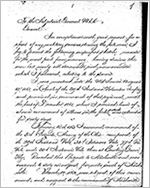 The Civil War tested the capacity for military leadership. The Civil War began with no real core of military experience; the Regular Army in 1860 comprised only four elderly general officers. At war's end, over a thousand men of every conceivable background and level of competence had worn a general's insignia. These leaders of all stripes alone determined by force of arms the outcome of the most decisive conflict in American history. These generals' reports of service represent an attempt by the Adjutant General's Office (AGO) to obtain more complete records of the service of the various generals contacted. Seeking both comprehensiveness and uniformity, the AGO requested each general to include certain kinds of information in his report. As a result, most of the reports consist of chronologically arranged sketches of activities associated with battles and other engagements. The generals also usually included information concerning the inclusive dates of their service with each command, the dates of their tours of duty as members of military commissions and courts-martial, and periods of leaves of absence. Many reports give the names, ranks, and dates of service of their personal staff officers and a summary or list of engagements in which the general took part. A few reports include newspaper clippings, maps, or pamphlets.