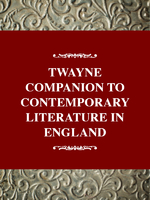 Twayne Companion to Contemporary Literature in English: From the Editors of The Hollins Critic, 1st Edition

The Twayne Companion to Literature in English is a reference anthology of valuable essays on literary criticism, with a focus on North American, British, and Irish poets and writers of fiction in the last quarter century.

This title offers a unique collection of critical essays on writers of poetry and fiction of the past 25 years. This 2-vol. anthology provides detailed, updated entries on approximately 100 American, Canadian, British and Irish writers.

Twayne Publishers is privileged to collaborate with the editors of The Hollins Critic, the journal based at Hollins University in Roanoke, Virginia, which is internationally famous for its writers-in-residence program. The Hollins Critic, published five times a year, presents the first serious surveys of the whole bodies of contemporary writers' work, with complete checklists. Its focus is on the trans-Atlantic tradition, which includes the literature of the United States, Canada, Great Britain, and Ireland.

"This two-volume set comprises critical examinations of 101 writers who were working or influencing the work of other writers during the past quarter of a century, and who have not been widely written about elsewhere. The essays present biographies, context-setting discussions, and critical interpretations of their major works, revealing how they represent a literary movement towards openness and diversity of style and content more varied and interesting than would be required in terms of political correctness..." -- Reference & Research Book News (February 2003)

"Part of the new Twayne Companion to Literature series, this set features 101 select essays reprinted from The Hollins Critic during the period between 1975 and 2002... The authors covered are a nice representation of the 'postmodernist chaos' arguably present in contemporary fiction. Recommended for academic libraries." -- Booklist (April 2003)

"This two-volume set comprises critical examinations of 101 writers...who have not been widely written about elsewhere. The esays present biographies, context-setting discussions, and critical interpretations of their major works, revealing how they represent a literary movement towards openness and diversity of style and content more varied and interesting than would be required in terms of political correctness." -- Book News, Inc. (Febraury 2003)

"The critical essays in this massive two-volume anthology (pages total nearly 1,200) examine the work of 101 writers who together constitute a picture of English literature at the end of the 20th century and the beginning of the 21st. Each essay runs from 5,000 to 6,000 words; all were written between 1975 and 2002 and were originally published between 1975 and 2002 in the literary journal The Hollins Critic, which was founded to allow critics more latitude than many review journals do. Including primarily the work of US writers--with some contributions by Canadian, English, and Irish writers--the anthology can be used as a simple, straightforward read or as an encyclopedia-type resource. This reviewer found it invigorating to read contiguous essays; for example, the 36 pages covering Octavia Butler's science fiction, John Cage's enigmas, Ann Canon's poetry of fear, and Raymond Carver's painful fiction. Dillard and Cockrell include short biographies of the contributors, lists of books by the authors, and a detailed 55-page index. Summing Up: Recommended. A useful resource for undergraduates and general readers." -- Choice (May 2003)

"Students who need to know what a biographical essay might include could use this volume as an example. Entries range from the more frivolous to the traditional, with everything in between. The essays here are critical discussions of the works of 101 writers, not necessarily those who have been widely written about elsewhere, who have influenced other writers over the past 25 years. According to the introduction, "The factual portrait of writing in our time that it produces is not a picture of an age coming to an end, as would have been the case had this volume been published in 1953 rather than 2003. It is rather a portrait of an age coming into being. . . ." "An opening chronology beginning in 1975 closes with 2002 and includes key events in literary history and major publications within the timeframe. Entries are in alphabetical order and, in each author's or poet's essay, one finds a black-and-white sketch of the person along with the brief biography. The essays include context-setting discussions and critical interpretations of the authors' major published works, a bibliography of books by the person and a career update. Your level of need for this reference relies heavily upon the level of detail required in your high school literature class assignments." -- Blanche Woolls and David Loertscher's online Reference for Students (January 2003)