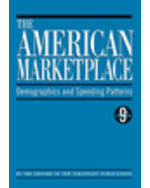 Designed for convenience, The American Marketplace draws on scores of government and proprietary sources to give you a population profile of the United States in one handy volume. Its hundreds of tables are organized into 11 chapters covering attitudes, education, health, housing, income, labor force, living arrangements, population, spending, time use, and wealth. New to this edition of The American Marketplace is a chapter on attitudes based on data from the recently released 2008 General Social Survey. Also new is a chapter on time use that examines data from the 2007 American Time Use Survey. Plus, you get a look at the latest data on the changing housing market and demographic profiles of who owns those homes. Included are the latest income and labor force data and new projections of the Asian, black, and Hispanic populations to 2025. Data in the spending chapter reveal how spending patterns are changing. The wealth chapter has been updated with the latest and most timely findings from the Survey of Consumer Finances.