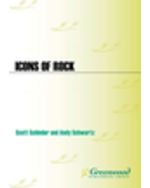 Icons of Rock: An Encyclopedia of the Legends Who Changed Music Forever, 1st Edition

More than half a century after the birth of rock, the musical genre that began as a rebellious underground phenomenon is now acknowledged as America's — and the world's — most popular and influential musical medium, as well as the soundtrack to several generations' worth of history. From Ray Charles to Joni Mitchell to Nirvana, rock music has been an undeniable force in both reflecting and shaping our cultural landscape. Icons of Rock offers a vivid overview of rock's pervasive role in contemporary society by profiling the lives and work of the music's most legendary artists.