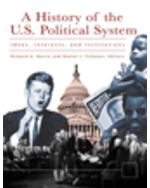 A History of the U.S. Political System: Ideas, Interests, and Institutions, 1st Edition

Although the United States has followed the same constitution for over 220 years, its political system has always been a work in progress. In just the past few years, a disputed election was resolved by the Supreme Court and, in response to 9/11, our foreign policy has been significantly redefined. How have challenges such as these shaped American politics? What ideas, institutions, and policies have provoked changes in the U.S. political system over time?

The U.S. Political System is a three-volume collection of original essays and primary documents that examines the ideas, institutions, and policies that have shaped American government and politics throughout its history. The first volume is issues-oriented, covering governmental and nongovernmental institutions as well as key policy areas. The second volume examines America's political development historically, surveying its dynamic government era by era. Volume three is a collection of documentary materials that supplement and enhance the reader's experience with the other volumes.