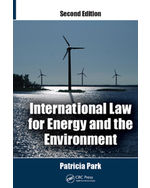 International Law for Energy and the Environment, 2nd Edition

This completely revised edition of Energy Law and the Environment has greatly expanded its scope to explore how international law engages with multinational companies regarding energy sources, ownership of those resources, and state sovereignty. Written for all the players in the energy sector, lawyers and non-lawyers alike, this second edition has been aptly renamed International Law for Energy and the Environment. It considers issues of energy sector regulation related to economics and protection of intellectual property associated with development of technologies for mitigating environmentally damaging emissions.The book is divided into three sections that build upon each other. Section I addresses the interrelationship between international law, environmental law, and the energy sector. It covers regulatory theory within an economic context; the regulation of multinational companies with regard to international regulation and state rules; and trade, competition, and environmental law in the energy sector. Section II examines the regulation of the various energy sectors—oil, gas, and nuclear—and how international law affects them and their ownership, risk, and liability.Section III considers some of the main energy producer/user jurisdictions where energy companies operate, including more developed systems around the world, such as the United States, the European Union, the United Kingdom, Norway, and Australia as well as two major emerging economies, namely, India and China. The final chapter reviews the material presented in the book, drawing conclusions about the current state of environmental regulation in the energy sector and identifying potential future developments.