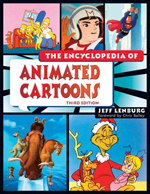 The Encyclopedia of Animated Cartoons, Third Edition, now thoroughly revised and updated, remains the definitive source on this entertaining subject. This edition of the "ultimate cartoon fan bible" adds copious amounts of new material, bringing the book up to date and broadening the scope of its coverage. Arranged in an A-to-Z format and separated into five major sections - Silent Cartoon Series, Theatrical Sound Cartoon Series, Full-Length Animated Features, Television Cartoon Series, and Animated Television Specials - this comprehensive encyclopedia includes an extensive historical overview of animation, complete information about Academy and Emmy award winners, and a chronology of animation milestones. Coverage of increasingly popular anime has been added and expanded.