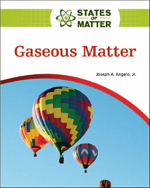 GASEOUS MATTER focuses on the many important discoveries that led to the scientific interpretation of matter in the gaseous state. This new, full-color resource describes the basic characteristics and properties of several important gases, including air, hydrogen, helium, oxygen, and nitrogen. The nature and scope of the science of fluids is discussed in great detail, highlighting the most important scientific principles upon which the field is based. Chapters include: Gaseous Matter An Initial Perspective, Physical Characteristics of Gases, The Rise of the Science of Gases, Kinetic Theory of Gases, Earth's Atmosphere, Wind Its Power and Applications, Air Pollution, Human Flight, Some Interesting Gases, Gases for Energy.