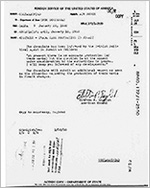 The Persian Gulf and Yemen: American Ascendancy and the Cold War, 1950-1959

The U.S. State Department Central Files are the definitive source of American diplomatic reporting on political, military, social, and economic developments throughout the world in the 20th century. The Persian Gulf States (Kuwait, Muscat and Oman, Qatar, and the Trucial Sheikdoms) and Yemen represent an area Britain had long considered vital as a route between India and Egypt. These Central Files document the controversial British presence in the Gulf region during the 1950s and focus on other historic issues. These issues include: petroleum wealth in Kuwait, Iraqi interest in Kuwait, civil strife in Muscat and Oman, and Arab nationalism in Yemen. In addition, these documents highlight the structure and activities of the Persian Gulf States' and Yemen's political system, government, judiciary, laws, military, customs, economy, finance, agriculture, natural resources, industry, communications, and media. Because of the broad scope of these records, they both supplement and complement the coverage offered by the State Department's Foreign Relations of the United States series.