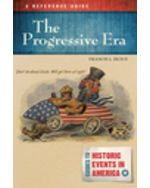 The progressive impulse that energized the United States between 1890 and 1920 forever altered the nature of American government and its relation to its citizens. This book was written to reveal the challenges Americans faced during the Progressive Era and to show how their responses helped transform the nation. Combining a narrative on the era with biographies of key participants, significant primary sources, and an annotated bibliography, the topically organized volume offers a lively contextual guide to one of the great turning points in American history. In addition to covering the major political events of the era, the guide provides profiles of prominent Progressive figures such as Eugene V. Debs, Mother Jones, Margaret Sanger, Jacob Riis, and W.E.B. DuBois. Teddy Roosevelt, Woodrow Wilson, and the National Progressive Agenda are covered, as are the Muckrakers, the African American struggle for equal rights, the women's suffrage movement, and efforts to better the conditions of factory workers. The guide also details the rise of the American Empire as the United States took its place on the world stage. The most recent historiography is interwoven throughout.