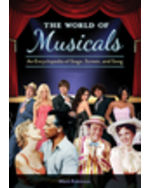 The World of Musicals: An Encyclopedia of Stage, Screen, and Song, 1st Edition

Written with high school students in mind, The World of Musicals: An Encyclopedia of Stage, Screen, and Song encompasses not only Broadway and film musicals, but also made-for-television musicals, a genre that has been largely ignored. The two volumes cover significant musicals in easily accessible entries that offer both useful information and fun facts. Each entry lists the work's writers, composers, directors, choreographers, and cast, and includes a song list, a synopsis, and descriptions of the original production and important revivals or remakes. Biographical entries share the stories of some of the brightest and most celebrated talents in the business. The encyclopedia will undoubtedly ignite and feed student interest in musical theatre. At the same time, it will prove a wonderful resource for teachers or community theatre directors charged with selecting and producing shows. In fact, anyone interested in theatre, film, television, or music will be fascinated by the work's tantalizing bits of historical and theatre trivia.