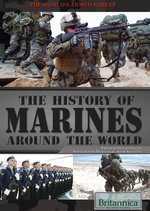 The History of Marines Around the World, 1st Edition

By combining both naval and terrestrial tactics, marine forces have formed a key part of many armed forces in history and are notably often among the first to fight. This thorough guide to the world’s most prominent marine corps covers the use of amphibious assaults in the major conflicts of the last two centuries, including the Napoleonic Wars, both World Wars, the Korean War, the Falklands War, and conflicts of the 21st century, among others. Photographs and sidebars help make this book as visually appealing as it is informative.