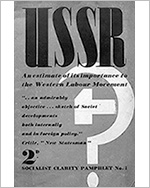 This collection contains uncatalogued pamphlets pertaining to communism, socialism, and class struggle. The pamphlets are global in scope, although they are all in English unless otherwise noted. The bulk of the collection originates from China and Soviet Russia during the post-WWII period, although Cuba and Britain are strongly represented as well. These materials include a selection of translated speeches from Mao Zedong, as well as Joseph Stalin, Vyacheslav Molotov, and other prominent Soviet policy-makers from the era. Also included within the collection are Cuban communist pamphlets from the late 1950s. These documents are comprised of anti-American tracts, pro-revolutionary materials, and a small number of Fidel Castro’s speeches. Some of the Cuban material is only available in French. In addition, there is a small selection of pamphlets published in Britain during the late 1930s and early 1940s concerning class struggle and working conditions for laborers, as well as numerous pamphlets exploring Argentina's May Revolution of 1810 against Spain. The rest of the collection is composed of miscellaneous pamphlets and publications relating to communism, Marxism or Leninism, civil rights and women's rights.