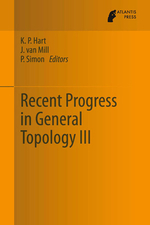 The book presents surveys describing recent developments in most of the primary subfields of General Topology, and its applications to Algebra and Analysis during the last decade, following the previous editions (North Holland, 1992 and 2002). The book was prepared in connection with the Prague Topological Symposium, held in 2011. During the last 10 years the focus in General Topology changed and therefore the selection of topics differs from that chosen in 2002. The following areas experienced significant developments: Fractals, Coarse Geometry/Topology, Dimension Theory, Set Theoretic Topology and Dynamical Systems.