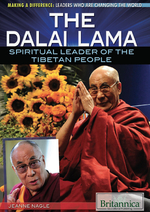 From his humble beginnings to his worldwide fame, the still-humble Dalai Lama, originally from Tibet, is an inspiration to many, Buddhist and non-Buddhist alike. Full of fascinating facts, this engaging book chronicles the life, achievements, awards, teachings, and ideals of this gifted and devoted promoter of peace and political independence—most notably for the people of Tibet, who remain under the control of the Chinese government. Though he himself remains exiled from Tibet, the Dalai Lama does all he can on the world stage to make the plight of his people known. This is the inspiring story of a uniquely passionate freedom fighter, political leader, public conscience, and spiritual guide.

Front Cover.
Title Page.
Copyright Page.
Contents.
Introduction.
1: Humble Beginnings, Early Trouble.
2: Celebrity for a Cause.
3: Notable Works and Achievements.
4: What the Future May Hold.
5: Timeline of Achievement.
6: Other Leaders who Have Made a Difference.
Glossary.
For More Information.
Index.