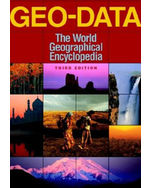 The 3rd edition of this comprehensive resource, now published by Gale, provides entries on the physical geography of every country in the world plus other selected locations. Each entry features a relief map depicting the geography of the location plus detailed text that describes its features, climate and vegetation. Entries are formatted with standardized rubrics to facilitate comparison. Statistics of particular use to students, such as tallest mountain and world size ranking, are highlighted in each entry. In addition, Geo-Data features a special rankings section, outlining statistics such as the ten longest rivers on each continent, largest deserts in the world and others. Includes a comprehensive index.

"The third edition of this wide-ranging resource to the physical geography of every country in the world features notable improvements in both format and coverage. Not only is it longer than the first,..but it has a markedly longer, more comprehensive index (by geographic name as well as thematic subject) and a special rankings section that lists highest mountains, longest rivers, largest deserts, and other statistics of particular use to students. ..Featuring a standized format to facilitate comparisons, the new edition is awash with physical maps and tables and various other statistics pertaining to climate and vegetation Definitely recommended for general reference collections in public libraries and undergraduate-college libraries." -- Library Journal (April 2003)

"McCoy's well-designed encyclopedia updates the 1989 edition considerably, a necessity in view of changes in central and eastern Europe, the former Soviet Union, and Africa. Physical geography constitutes this title's greatest strength, making it an ideal complement to Countries of the World and their Leaders (1980- ) or Worldmark Encyclopedia of the Nations...which give more data on cultural and economic geography...Appendixes include its strongest selling point as a ready reference title: 19 world ranking lists, many for limnological, fluvial, oceanic, and elevation features allowing this volume to serve earth science students as well as general readers. A handy glossary of physiographic terms has been added; typography and binding are first-rate...Highly recommended. All levels." -- Choice (June 2003)

"The first new edition since 1989 of Geo-Data, formerly edited by George Kurian, is a splendid example of what a reference book can be. Its purpose is to provide the reader with the most detailed and comprehensive description available of the physical geography of the countries of the world. ..Information is enhanced by a relief map of the country that is both clear and easy-to-read. ..Geo-Data's arrangement lends itself to readers who want to take a country-by-country approach. This is an excellent reference book that will be valuable for high schools and public libraries as well as academic reference collections. Highly recommended." -- Booklist (April 2003)