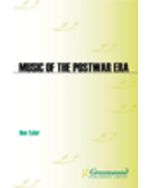 At the end of WWII, themes in music shifted from soldiers' experiences at war to coming home, marrying their sweethearts, and returning to civilian life. The music itself also shifted, with crooners such as Bing Crosby and Frank Sinatra replacing the Big Bands of years past. Country music, jazz and gospel continued to evolve, and rhythm and blues and the new rock and roll were also popular during this time. Music is not created without being influenced by the political events and societal changes of its time, and the Music of the Postwar Era is no exception. It includes combined musical charts for the years 1945-1959, with approximately 20 black and white images of the singers and musicians who represent the era's music.