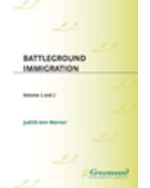 Among the most tumultuous conflicts of modern America is the war over legal and undocumented immigrants currently residing within U.S. borders. Since the passing of the 1965 Immigration and Naturalization Act, America has witnessed an unprecedented flow of immigrants onto its shores, with increased diversity of race and culture. Battleground: Immigration examines the most critical issues surrounding immigration today, including effects on the economy, education and employment, as well as the viability of the foreign-born in American society. All sides of the immigration debate are explored in this comprehensive two-volume set, with special weight given to the very specific issues that have arisen in post-9/11 America: homeland security and border control; 9/11's impact on legislation and civil liberties; the Department of Homeland security and its role in border control; transnational organized crime, human smuggling and trafficking; and post 9/11 border control and security impact on immigration. With direct ties to the curriculum, this set is a valuable resource for students of sociology, current events, American history, political science, ethnic studies, and public policy.