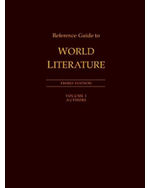 Historical in scope, the Reference Guide to World Literature includes biographical-bibliographical entries on nearly 500 writers and approximately 550 entries focusing on significant works of world literature. Covering writers from the ancient Greeks to 20th-century authors, each author entry provides a detailed overview of the writer's life and works. Work entries cover a particular piece of world literature in detail.

"...Reference Guide to World Literature is indeed a useful tool for researchers and aficionados of international literature. It is a worthy companion to works such as Contemporary World Writers (St. James, 1993), Cyclopedia of World Authors (Salem, 1997), Encyclopedia of World Literature in the 20th Century (St. James, 1998), and Gale's World Literature and Its Times series. Although not inexpensive, it is especially recommended for academic and large public libraries lacking coverage in the area." -- Booklist (April 2003)

"...recommended for ready reference in libraries with large world literature sections and for smaller libraries needing more information in this area." -- ARBA (2003)

"Spanning more than 1,700 pages, this hefty guide is a worthy addition to the St. James reference guides to English and American literature... This source is valuable for several reasons: its worldwide (non-English) scope, depth of detail, and authoritative signed critical assessments and essays...This set has visual appeal and a binding that supports even the 1,000—page first volume. For libraries needing a comprehensive source on non-English literature. Highly recommended." -- Choice (September 2003)