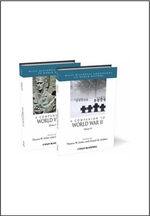 Offering readers much more than a military history, this unparalleled collection of 58 state-of-the-field historiographic essays explores the widely varying contexts in which nations and transnational communities experienced World War II. In doing so, it provides insight into how the war linked nations, systems, and cultures, and sets the agenda for future research. A Companion to World War II introduces readers to the myriad factors influencing the wars developments, examining the various theatres of operation, the diplomacy, economics, intelligence, and home front experiences of a host of nations including major neutrals. The essays include topics as diverse as American anti-Semitism, women in wartime, French-African soldiers, internal resistance in Nazi Germany, the wars impact on the struggle for independence in India, and post-war planning, among others. The collection identifies scholarly and official debates - in the English-speaking community as well as in other languages - about the course of the war through historiographic analysis by established and emerging experts in their fields. It represents a major new contribution to the academic literature on an event of unparalleled centrality in world history.