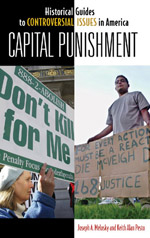 CAPITAL PUNISHMENT examines the debate around the death penalty, raising questions and attempting to provide an even-handed examination of this controversial practice. The authors combine analysis of important issues with excerpts from landmark legal decisions, important documents, survey results, and empirical data. The first part of the book discusses the origins of the death penalty and traces its development from antiquity to contemporary times. Detailed statistical information about capital punishment is presented and discussed, and the death penalty is considered against a constitutional backdrop with various arguments—for and against—articulated. The second part of the book consists of three appendices. The first appendix presents an annotated list of important capital-punishment cases; the second supplies a more general chronological treatment of capital punishment; and the third provides a bibliographic essay directing readers to other relevant sources of interest. A thorough and insightful treatment, CAPITAL PUNISHMENT provides both a summary of the current state of capital punishment and a discussion of areas of continuing controversy.