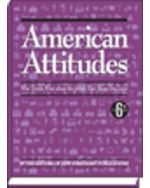 The sixth edition of American Attitudes: Who Thinks What about the Issues that Shape Our Lives coaxes the results of the latest (2008) General Social Survey out of the shadows of academia and makes them readily available for researchers who want to explore Americans' changing attitudes. In hundreds of tables, the sixth edition of American Attitudes taps into the GSS gold mine, revealing what the public thinks about topics ranging from gay marriage to the American Dream, how Americans feel about their financial status, their hopes for their children, how often they socialize and with whom, their religious beliefs, political leanings, and working conditions. It shows those answers by the demographics that shape perspective, sex, age, race, Hispanic origin, and education. American Attitudes also compares attitudes in 2008 with 1998, 1988, and 1978 (if available), examining how opinions have or have not changed during those three decades. The sixth edition of American Attitudes is organized into nine chapters: Public Arena, Government and Politics, Science and Information, Religion, Work and Money, Family and Friends, Race, Personal Outlook, and Sexual Attitudes and Behavior.