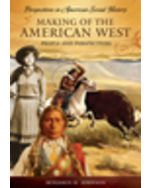 Making of the American West: People and Perspectives, 1st Edition

In the 19th century, the United States established control over the western half of the continent, boldly confronting Mexico, European powers, and powerful indian peoples. It was achieved through a combination of high-level politics, diplomacy, and military conflict -- but also shaping the expansion were ordinary people from all walks of life, responding to the allure of the West as a place of extraordinary promise.

Making of the American West surveys the experiences of major social groups in the lands from the Mississippi to the Pacific, from the United States' penetration of the region in the early 19th century to its incorporation into national political, economic, and cultural fabric by the early 20th century.

This revealing volume offers fascinating portraits of the people and institutions that drove the Western conquest (traders and trappers, ranchers and settlers, corporations, the federal government), as well as of those who resisted conquest or hoped for the emergence of a different society (Indian peoples, Latinos, Asians, wage laborers). Throughout, expert contributors continually return to the growing myth of the West and the impact of its promise of freedom and opportunity on those who sought to "Americanize" it.