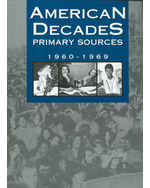 The 1960s saw the world come to the brink of nuclear war as the United States and Soviet Union faced off in the Cuban Missile Crisis, and U.S. advisors and troops were sent to Vietnam to combat communist forces wanting to take over that country. President John F. Kennedy was assassinated as he campaigned in Texas for reelection, plunging the nation into stunned mourning. Martin Luther King Jr. gave his inspiring "I Have a Dream" speech at the March on Washington, and the Civil Rights Act became law, but King himself was assassinated. While the 1960s contained the upheaval of violence and change, is also saw the colorful burst of tie dye, the first airing of Sesame Street, the wild popularity of the Beatles, and the first man to walk on the moon.

"This carefully crafted new offering from Gale is sure to be a worthy heir to the discontinued classic documentary American history reference source, The Annals of America (Encyclopaedia Britannica, 1968-1987),.. Gale's latest contribution to the field is intended to serve as a companion to their popular series, American Decades (Gale Group, 1994-2001) and would complement many of the publisher's other prominent reference works in American history, notably the two-volume stand-alone Gale Encyclopedia of Multicultural America: Primary Documents (see ARBA 2001, entry 271). This work will also make an ideal companion set for the many libraries that already own The Annals, as this new work offers limited coverage, its entries usually provide essays about and excerpts from primary sources rather than the full text of the sources themselves, it is more comprehensive, and despite some inevitable overlap, its selections are generally different...American Decades: Primary Sources is certain to become the centerpiece of many serious American history reference collections. This new work is so innovative and well done that it may become a classic itself, and at its advertised price of less than $100 for each sturdy, well-designed volume, well worth the investment." --ARBA (2004)

"Aimed at the high-school and undergraduate levels, but definitely accessible to middle-schoolers, this set is a treasure trove of more than 2,000 primary sources on U.S. history and culture represented by more than 75 types of sources, such as architectural drawings, graphs, letters, magazine articles, memoirs, reports, Supreme Court decisions, speeches, and literary works. This resource is excellent as a companion to the American Decades (Gale, 1996-2000) set or as a stand-alone. Even if a library had access to all of the books, periodicals, and other items used as sources, they would lack the surrounding context and the added features, not to mention the convenience. Secondary school libraries in states with curriculum standards that require access to primary resources should place this on their priority purchase lists if they can afford it. Undergraduate and public libraries supporting historical research should also consider purchase."--Booklist (April 2004)

"This set provides access to information that will be difficult to find in other places without a great deal of weeding. It can begin the student thinking critically about events in history. Your students need access to this set, especially if you have American Decades."--Reference for Students (www.gale.com) (May 2004)