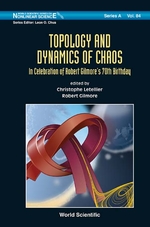 The book surveys how chaotic behaviors can be described with topological tools and how this approach occurred in chaos theory. Some modern applications are included.The contents are mainly devoted to topology, the main field of Robert Gilmores works in dynamical systems. They include a review on the topological analysis of chaotic dynamics, works done in the past as well as the very latest issues. Most of the contributors who published during the 90s, including the very well-known scientists Otto Rössler, Ren' Lozi and Joan Birman, have made a significant impact on chaos theory, discrete chaos, and knot theory, respectively.Very few books cover the topological approach for investigating nonlinear dynamical systems. The present book will provide not only some historical - not necessarily widely known - contributions (about the different types of chaos introduced by Rössler and not just the Rössler attractor; Gumowski and Miras contributions in electronics; Poincar's heritage in nonlinear dynamics) but also some recent applications in laser dynamics, biology, etc.

Front Cover.
Half Title Page.
Other Frontmatter.
Title Page.
Copyright Page.
Preface.
Other Frontmatter.
Contents.
1: Introduction to Topological Analysis.
2: Emergence of a Chaos Theory.
3: The Peregrinations of Poincaré.
4: A Toulouse Research Group in the “Prehistoric” Times of Chaotic Dynamics.
5: Can We Trust in Numerical Computations of Chaotic Solutions of Dynamical Systems?.
6: Chaos Hierarchy — A Review, Thirty Years Later.
7: Development of the Topology of Chaos.
8: The Mathematics of Lorenz Knots.
9: A Braided View of a Knotty Story.
10: How Topology Came to Chaos.
11: Reflections from the Fourth Dimension.
12: The Symmetry of Chaos.
13: Applications of Chaos Theory.
14: The Shape of Ocean Color.
15: Low Dimensional Dynamics in Biological Motor Patterns.
16: Minimal Smooth Chaotic Flows.
17: The Chaotic Marriage of Physics and Financial Economics.
18: Introduction of the Sphere Map with Application to Spin-torque Nano-oscillators.
19: Robert Gilmore, a Portrait.
Author Index.
Subject Index.