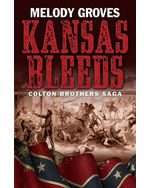 Kansas Bleeds is a fast-paced historical novel set in Civil War Kansas pitting family values against personal ideals. The “Brothers’ War” places brother against brother‚ father against son. And for the Colton Family‚ there is no escape.

Luke Colton resolutely believes two things: slaves are crucial to the South’s well-being‚ and states must be allowed to make their own laws. Unfortunately‚ no one else in his family agrees.

By the time Luke figures out his family’s views are right and he is wrong‚ it’s too late. Quantrill’s out to burn down Lawrence and kill Luke for being a traitor.