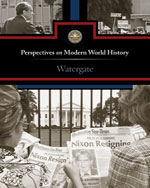 This new addition to the Perspectives on Modern World History series explores the historical and cultural events leading up to and following the Watergate scandal, from the 1972 break-in through Nixon's resignation. The text addresses several issues surrounding Watergate, such as controversies related to the presidential impeachment, the media's role in both exposing the scandal and impacting the aftermath, and problems with the idea of presidential privilege. Personal narratives from people impacted by Watergate, including remembrances by Julie Nixon Eisenhower and John Dean, are also featured.