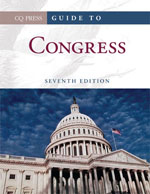 The new edition of this comprehensive, two-volume reference has been thoroughly revised and expanded by expert CQ Press writers to offer a complete institutional history of Congress along with updated insight and analysis on the 2008 and 2010 shifts in power of the U.S. Senate and House of Represenatives.