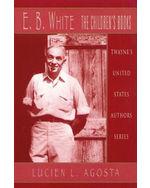 Lively and comprehensive analysis of E. B. White's writings for children, addressing the works themselves, their reception by critics, and White's views on children's literature. Beginning with a biographical sketch of White, Agosta looks at the places and events of the author's youth and later life---the wilds of Canada and the Edenic simplicity of Maine---that influenced his creation of Arcadian worlds in his fiction. Agosta also discusses some of White's theoretical positions as expressed in the essays "A Boy I Knew" (1940) and "Children's Books" (1938), in which White took inventory of a few central concerns that would find their way into his three novels. Agosta's portrait of the author and his literary domain is essential reading for student and scholar alike, or for anyone interested in the background of this writer who has so influenced children's literature.