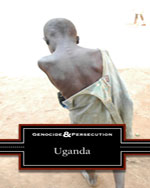 This title explores genocide and persecution in Uganda, including the historical/cultural background of events from the early 1970s to the twenty-first century. Issues surrounding events such as the despotic rule of Idi Amin, Milton Obote, and Yoweri Museveni and genocidal acts committed by government and rebel forces throughout the latter half of the 1900s and the early 2000s. Personal narratives from people touched by the events in Uganda, including a Ugandan exile terrorized under Idi Amin's government and a young girl abducted and forced to fight for the rebel group the Lord's Resistance Army.